As I mentioned in my second post about Firefly over the summer, the first time I saw Chance the Rapper perform, I was so far away from the stage that I felt as connected to the performance if I had just watched it on my television at home.  Luckily, I was given the ~chance~ to rectify this experience at Chance’s September 26th performance at Forest Hills Stadium.

Chance is one of my favorite artists for a lot of reasons, and his transparency is something I admire most.  I think that technology allows people to be almost too accessible, but Chance has a penchant for giving people small, but arguably the most meaningful insights into his life.  Sure, he’ll go on Twitter to talk about a move he thought Rotten Tomatoes rated poorly (an actual story that made headlines yesterday), but an overwhelming amount of his platform is dedicated to discussing injustices and causes he cares about, as well as ways his fans can help in a way that is still effective yet not our of their means.

…But back to the concert.  Opening for Chance was Francis and the Lights.  His performance, though I’m not too verses in his music, was sweet.  He said to the audience he felt like it was not proper for an opener to gush about the main performer, but did not stop himself from giving Chance some compliments.  Francis has a performance style best described as eccentric.  His music relies heavily on a thick, auto-tuned voice as well as guitar solos he takes the time to dance through.  There’s something haunting about his vocals.

Between opener and main performer was a set by DJ Oreo.  Though I was unfamiliar with him before, I’ve decided I now love no one more.  His set was eclectic and varied — his transitions went from Miley Cyrus to Marvin Gaye – and he seemed really comfortable interacting with an audience he knew was itching for Chance.   I also checked out his Facebook page and he posts inspirational quotes every day.  Here’s a recent verse: To accomplish great things, we must not only act, but also dream; not only plan, but also believe.

Something that confused me about Chance’s Firefly performance was his incredulousness at the amount of people that had come to see him, figuring, surely there could not be that many Chance the Rapper fans.  I thought maybe this was an act, perhaps he was playing coy — how could someone doubt the amount of people interested in their music at a festival they are headlining? Yet, at Forest Hills, he did it again. Chance spoke about how grateful he was to have been put in this position – one he wouldn’t be in had it not been for the people supporting him.  His entire Be Encouraged tour honors the people whose support is marked by longevity: he plays with the Social Experiment and performs songs from old albums including Surf, and Acid Rap, as well as features from The Life of Pablo.

Chance talked to the audience a lot about how fearless people are the most intimidating out there, and encouraged those who knew they were fearless to recognize when that was lacking in others in order to let them burst through that threshold into uninhibited fearlessness.

For the first time in concert, Chance performed his new song “First World Problems”.  It wasn’t perfectly polished, and in that, the lyrics were more poignant as he discussed his desires to step back from the social spotlight, missing his daughter and feeling like he isn’t doing enough for her, and the sense of responsibility all people should feel during times of uncertainty to rectify what they can.

Chance’s performance left me feeling whole.  His unwavering faith and desire to go and do and be better is inspiring. See below for his full setlist and a photo of him looking extra. 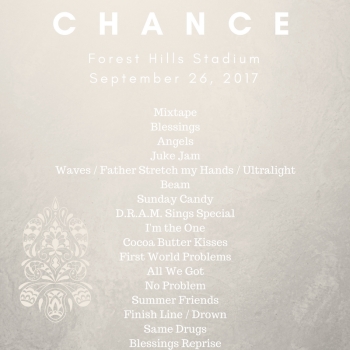