On Thursday, July 20th, John Mulaney put on his best suit (perhaps this time, coming straight from his Confirmation) and set out to “win his crowd” — advice he told the audience of Port Chester, NY was prophetic knowledge bestowed unto him by Ray Lewis in 2013.  Among other reactions to this enigma including going on a juice cleanse, doing a little sleuthing to uncover the meaning behind Lewis’s vague “..when I was going through what I went through…”, and launching a sit-com on Fox, which Mulaney himself called “an unmitigated… disaster.”

It’s this type of gut-wrenching honesty you can expect when seeing John Mulaney perform.  I’ve been a fan of his for years, and there’s just something inherently likeable about him (which is probably a good thing, considering he devoted a small amount of his act to discussing his insatiable need to be liked by everyone).  Perhaps it’s this bluntness juxtaposed with softer moments that makes his comedy successful and relatable: in one moment, he is stressing over how to maximize friendliness via email, and in the next, he is ragging on the childhood friend we all knew whowaited for the stroke of midnight to say “It’s tomorrow! Everything we’ve done at this sleepover happened yesterday!” 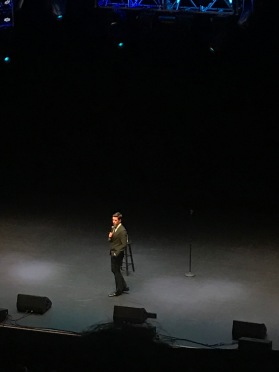 The first time I saw him perform was also at The Capitol Theater for his third Netflix special (fourth album overall) The Comeback Kid, and I was excited to see him return to the stage with arena-specific humor.  (Bits included him ragging on the Metro-North for so long that he had to take a step back and question his own fascination with the public transportation; and a sweeping declaration that the theatre is haunted by “alive ghosts”, or Grateful Dead fans that have never left).

Mulaney’s comedy is always deeply reflective.  Receiving a request for a donation from his alma mater forced him to think about college as a structure and what it means to be a student making life-altering decisions at 17-years-old.  He talked about his tendency to zone out during conversation and how he is trying to be more present by taking up meditation, which, in his own word, sucks, and he hates it. He crosses the threshold into infamously taboo conversation topics and discusses issues he’s been presented with throughout life following leaving the Catholic church and marrying a Jewish woman.  He dances around politics through an extended metaphor about a horse in a hospital.  (It just wouldn’t be funny if I described it to you).

As I’ve mentioned before, I can always appreciate audience interaction, and that is something always incorporated in Mulaney’s acts.  When a viewer in the front row left to use the bathroom, he told the audience that somewhere within his set he was going to say the following phrase: “You know what they say in Port Chester”, to which we were supposed to respond “I want a milkshake!” — it was silly and nonsensical and when the moment happen (20 minutes later), Mulaney was tickled pink to have maybe slightly duped one person in a sold-out show.

I think SO highly of The Top Part, New in Town, and The Comeback Kid, and am excited to view this act when it goes on Netflix in order to really delve into it once again.  Because I have seen the others multiple times, I am hesitant to say that this was not Mulaney’s strongest act because I have less exposure to it.  There were, of course, moments in the act that had me clutching my sides (think: a very physical and over-the-top bit regarding Charlie and the Chocolate Factory and the sleeping situation of the grandparents being referred to as “a Mount Rushmore of bedsores” and Mulaney proclaiming his greatest desire to be acquiring a Best Buy gift card).  His humor has remained simultaneously honest and outlandish.  If you’re looking to get into standup, he’s definitely the right place to start (and hold onto).

3 thoughts on ““kid gorgeous” by john mulaney: a review”