just breathe it all in

C*mmuting. I’m writing this on the train home from work. For conveniences’ sake, and because, maybe, I forgot to write it last night. I was distracted by chocolate, my hedgehog, and the DNC. Also, I was way tired.

The reason I was way tired was, of course, work. I have a sneaking suspicion that’s why it’s called “work”, but I haven’t quite done my research yet (too busy at work). It’s officially been a month or somewhere there abouts that I’ve been employed as Paid Intern at Company I Won’t Name. I’m still undecided on whether or not I’m qualified for the position.

My Monday through Friday schedule is fairly simple. I wake up with my alarm at 5:50am, hit snooze for multiple five minute intervals until 6:15, the absolute latest I can get up and still have time to shower. I woke up at 6:25 this morning; maybe I smell, but in New York there’s always someone/something that smells worse.

After my morning ritual of standing miserably in the shower, miserably putting on my makeup, and grunting to my mom on the way out the door, I head to the train station. It’s about 20 minutes away on a good day, but it’s never a good day. Once there, I pick my spot, pay my $1.25, and wait for the train with the other zombies. I like to sit on the right hand side of the car, because the left is to the east and I hate the sun shining in my face like a damn maniac. It’s 7am, can someone please turn that thing off?

This past week I’ve been trying to doze on the hour ride to Secaucus Junction, but I haven’t been successful. I used to drink coffee during that time, but it messed with my stomach. So, be mostly asleep or have terrible pain? I don’t like this game.

After getting off at Secaucus and packing onto the next train to Penn Station like sardines, I stare into space and inevitably start to wonder what would happen if the train got stuck in the middle of the tunnel. Mole people? Real zombies? Who knows, but I’ll be prepared to die first.

Following the swim through Penn, I surface on 7th Ave with the rest of the workers, plus tourists, and the occasional ranting religious fanatic. I experimented with several routes to work, but the one I’ve decided on zigzags from 7th to 6th, avoiding Broadway to the best of my ability. When I finally get to work, it’s not so much a sigh of relief as a sigh, period.

But, complaints aside, I know I have to suffer through it for as long as possible because: poor. That’s really all there is to it. 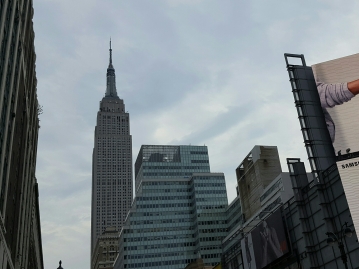 a photo I quickly took bc ew, what am I, a tourist?

One thought on “today’s dirty word”